Final-Five Voting is the powerful combination of (1) top-5 primaries and (2) instant runoff voting in the general election. The Final-Five Voting concept was pioneered by IPI Founder Katherine Gehl. How it works:

Fix #1: Get rid of the party primary

In a Final-Five Voting primary, all candidates running for Congress will appear on a single ballot, and all voters can participate in the primary regardless of whether they are registered with a party. 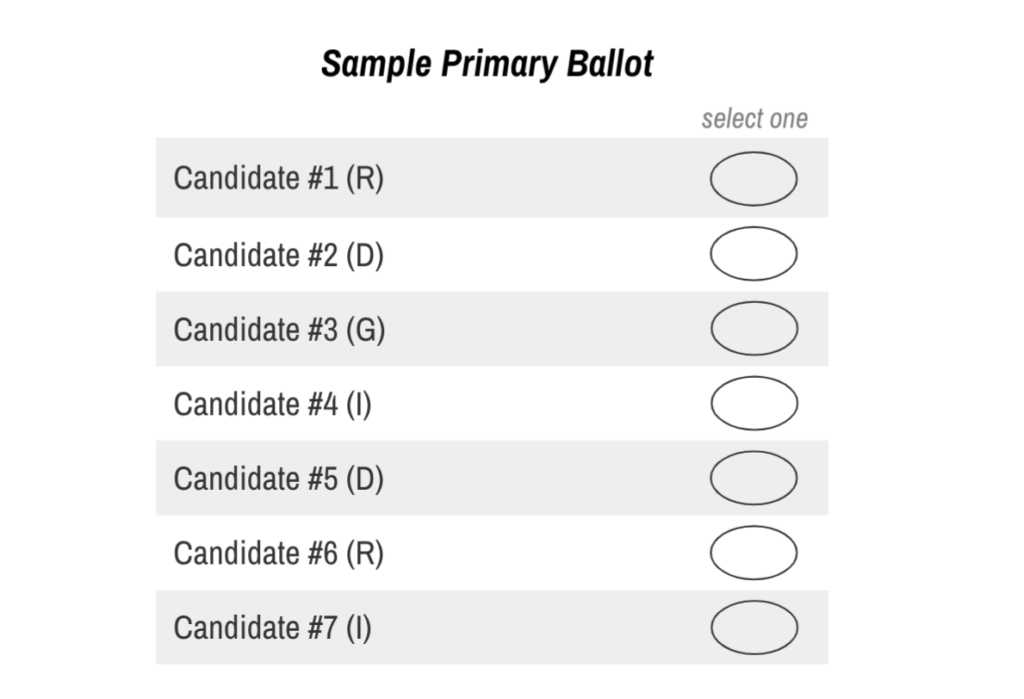 The top five finishers out of this open primary advance to the general election.​

The top five finishers out of this open primary advance to the general election.

Fix #2: Get rid of plurality voting

In a Final-Five Voting general election, voters use a ranked-choice voting ballot to rank candidates in their order of preference, first choice through fifth (ranking as many or as few as they want). 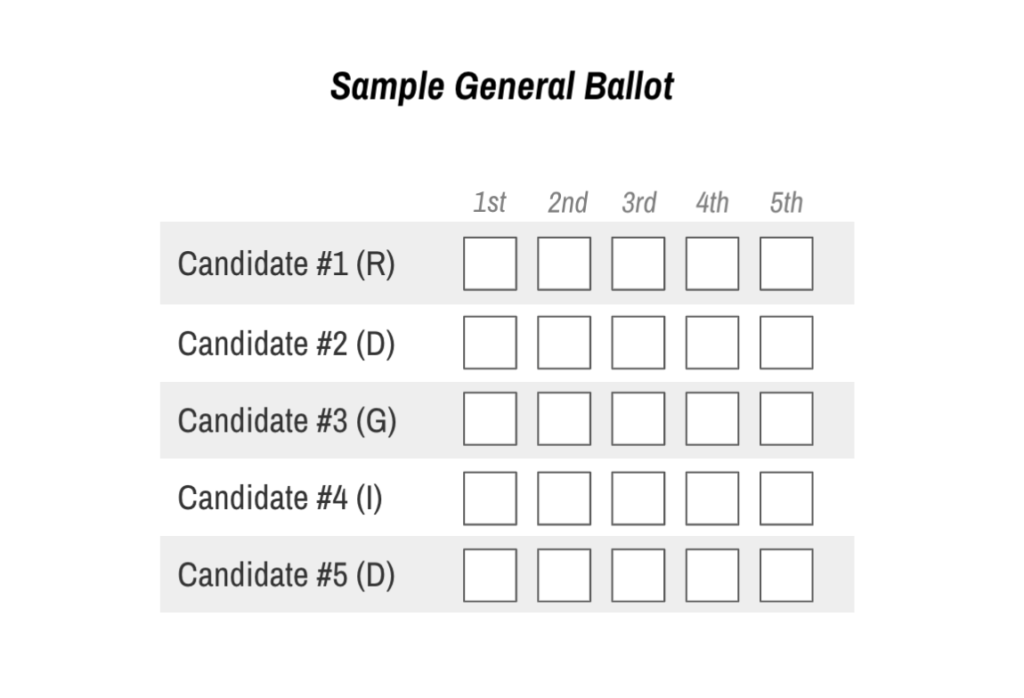 After the ballots are counted…

Article One of the U.S. Constitution vests states with the power to change their rules for Congressional elections as they see fit. There are two methods for change: See which states have the ballot option:

Article One of the U.S. Constitution vests states with the power to change their rules for Congressional elections as they see fit. There are two methods for change:

Type: Here is the value.

We want enough candidates in the general election for healthy, diverse competition but not so many that it’s confusing to the voter. Five is the “sweet spot” number. Five creates space for three more than the current system and, as a result lowers the “barriers to entry” (i.e., how hard it is and how much it costs to qualify for the general election) to make it easier for new competition to enter the race. Five increases the likelihood that innovative ideas, diverse candidates, and issue-focused candidates (those who may run to bring visibility to an issue) will enter the race and create a dynamic debate between the primary and the general. We cap it at five because with more than that it becomes substantively more difficult for voters to meaningfully distinguish between and develop opinions on a laundry list of candidates, and because we want to minimize the likelihood of what political scientists term “ballot exhaustion,” in which voters don’t rank all the candidates.

Why not other reforms? (Redistricting, Campaign Finance etc.) 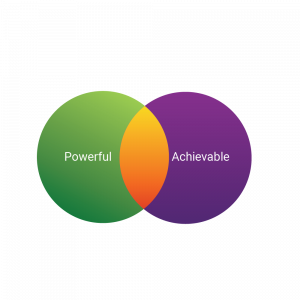 Final-Five Voting is both powerful (i.e. likely to substantively increase the likelihood that Congress can successfully address complex problems in a cross-partisan way) and achievable (i.e., can be implemented and impactful in a matter of years not decades). Most other reforms are less powerful or not as achievable or both. For example, reducing the influence of money in politics could require a constitutional amendment. Eliminating gerrymandering has been partisanized in a way that makes it far less achievable than our cross-partisan effort for Final-Five Voting—and on its own, gerrymandering won’t affect incentives enough to increase problem-solving in Congress because primaries would still exist and forbid the two sides to work together. Additionally, Final-Five Voting will—in most cases—lessen the negative effects of other systemic distortions like gerrymandering thereby reducing their negative impacts on our political system. Finally, over time, other reforms may become more powerful and/or achievable. Once we address key electoral incentives with Final-Five Voting, it will be much easier (i.e., more achievable) to reach cross partisan agreement on additional reforms if they’re needed.

How is Final-Five Voting different from ranked-choice voting?

Final-Five Voting is the combination of two innovations:

FFV’s power to increase the likelihood that Congress solves problems in the public interest comes from the combination of the two. On its own, RCV is dramatically less impactful because it simply doesn’t fix the incentives for problem solving that are created by party primaries. As such, Final-Five Voting is not synonymous with ranked-choice voting.

Will Final-Five Voting help one party more than the other?

Final-Five Voting is not a trojan horse for partisan advantage—its implementation doesn’t benefit one “side” more than the other. As Katherine Gehl always says, “Final-Five Voting is not designed to necessarily change who wins.  It’s designed to change what the winners have the freedom to do and are incented to do—and on whose behalf they’re doing it.” Final-Five Voting will reward candidates and parties that run the best campaigns, appeal to the most voters in the general election (not just to party primary voters as is the case in the current system) and do the better job of governing once in office. Surely you think that’s your party.

The Institute for Political Innovation is a 501(c)(3) organization, donations are tax-deductible.